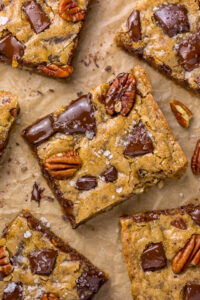 Brown Butter Bourbon Pecan Chocolate Chunk Blondies are chewy, crunchy, and loaded with gooey pockets of chocolate! The bourbon gives them a subtle kick without being overpowering! This easy and crowd-pleasing dessert recipe is perfect for holiday parties! And don't worry about the bourbon getting you tipsy... it's only a small amount and cooks out during the baking process.

Recipe by Baker by Nature at https://bakerbynature.com/brown-butter-bourbon-pecan-chocolate-chunk-blondies/