I’ve been aching to bake a cranberry sage pie since the very moment Summer packed up its bags, bid us adieu, and swiftly hit the road. Something about the two bold ingredients baking up in a flaky, buttery crust just seemed destined for pie perfection. I even wrote it down in my little “must bake before 2014” book…

But alas, somewhere in the middle of gobbling turkey and toasting to the New year, the idea got shoved to the baking backseat (who has time for handling pies when presents need wrapping?!) and had almost completely vanished from my thoughts when I found my old little notebook and decided to take those 2013 goals and transfer them right on over to the new year. Why not, right!?

I got the idea for these fat and flaky little pie bites at a dinner party we went to last month. In lieu of a traditional dessert buffet, our hosts just had a few platters of mini-treats set out for self snatching. Such a great idea!

While all of the teeny-tiny desserts were phenomenal, the petite pies stole the show – and my heart!

The main reason everyone raved over these pies was the CRUST!!! I mean… there’s just so much of it. Which, if you’re a crust lover, (and who isn’t?!) is a very, very good thing.

Since cranberry and sage are such big, bold, badass flavors (that can lean a little on the aggressive side), I knew right away that a lot of crust would be the perfect way to counterbalance their feisty flavors. 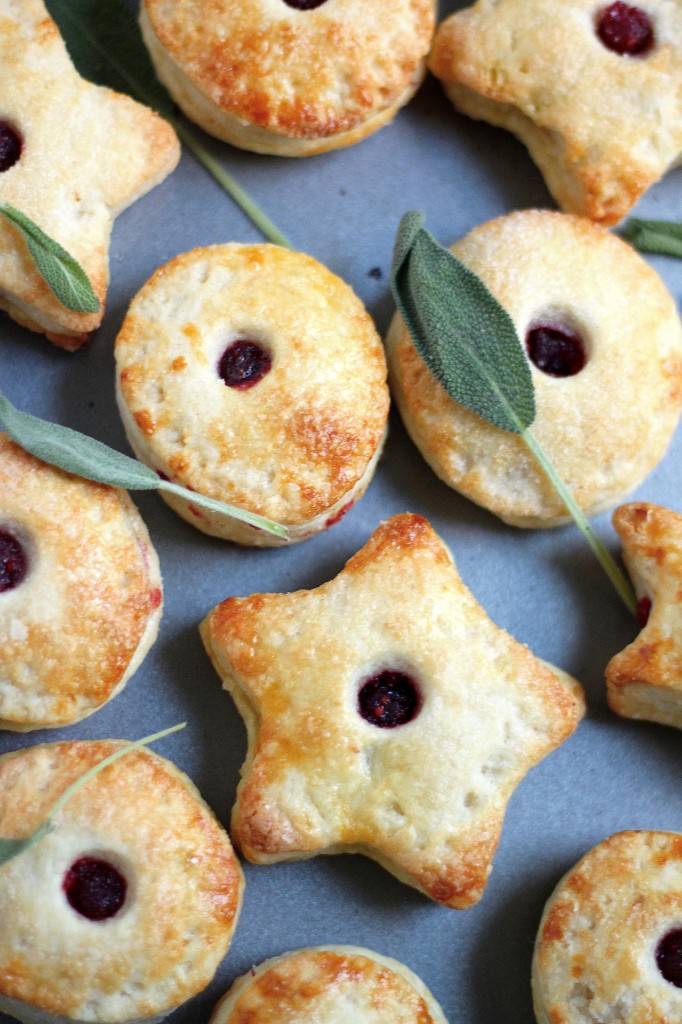 Buttery crust + Sweet sage and Cranberry filling = a match made in heaven!

Just be warned… no way you’re stopping at one bite 😉

Makes about 25 pie bites, depending how willing you are to re-chill the scraps of dough and then roll them out

For the Pie Pastry:

For the Cranberry Sage Filling:

For the Pie Pastry:

In a large bowl whisk together the flour, sugar, zest, salt, and baking powder. Add the butter, working it in with your hands until it resembles a coarse mixture. The butter should be pea sized when you stop working it in.

Stir in the sour cream. The dough will still be very scraggly. Turn it out onto a well floured surface, and bring it together with a few quick kneads.

Chill for at least 1 hour.

Preheat the oven to 425°F; place a rack on the middle shelf. Line a baking sheet with parchment paper.

Roll the dough into a large square that’s about 1/4 of an inch thick. Using a small cookie cutter of your choice (I went with circles and stars obviously) cut an even number of shapes out of the dough. On one half of the cut outs make a small slit or cut out shape. Fill the other half of the cut outs with 1 heaping teaspoon of the cranberry sage filling, brush the edges lightly with the beaten egg, then top with a slit cut out piece. Use a fork to crimp down the edges, and lightly brush the tops of each pie with the egg wash. Sprinkle lightly with sugar, and place them on prepared baking sheet.

Bake the pies for 18 minutes. Remove from the oven, and cool for at least 20 minutes before serving.

For the Cranberry Sage Filling:

In a blender or food processor pulse cranberries and sage for 15 seconds, or until both have broken up into small bits but are not completely pulverized.

Combine all the ingredients in a saucepan set over medium high heat. Simmer, stirring almost constantly, until the mixture starts to thicken – about 5 minutes. Turn to very low and let cook for another 2 minutes before removing from the heat. Transfer the cooked mixture to a bowl and let cool to room temperature. Once cooled, fill pies according to instructions above.

*You will most likely have leftover pie filling, but it makes a great jam substitute or cookie filling 🙂