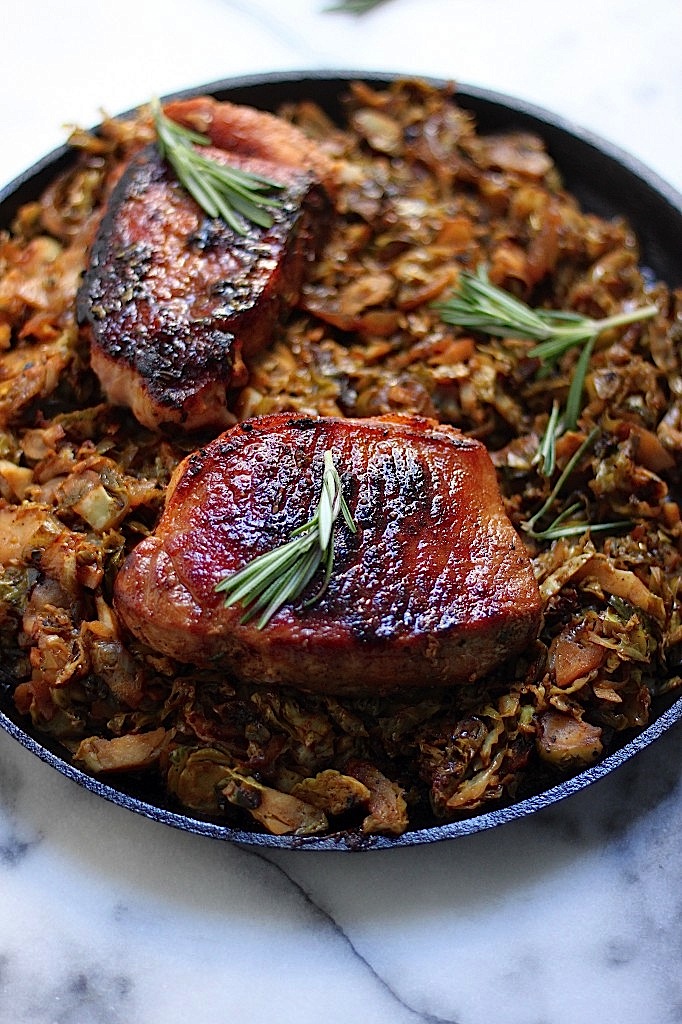 Hi! Yesterday I told you I’d see y’all for dinner, so um… here I am! With your dinner.

Am I a girl that keeps her promises or what? 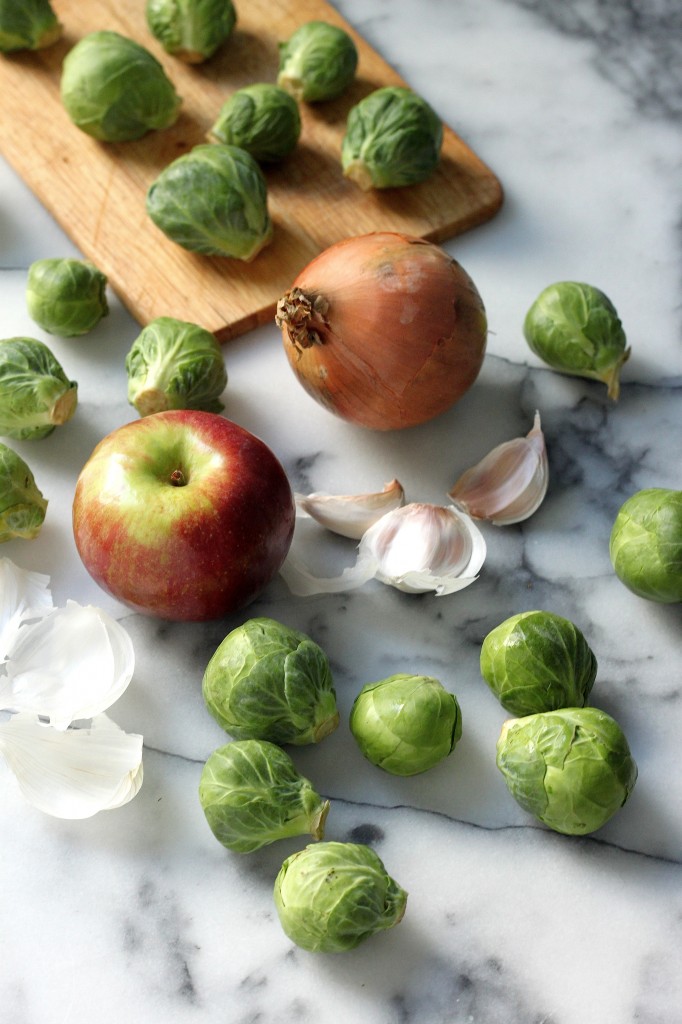 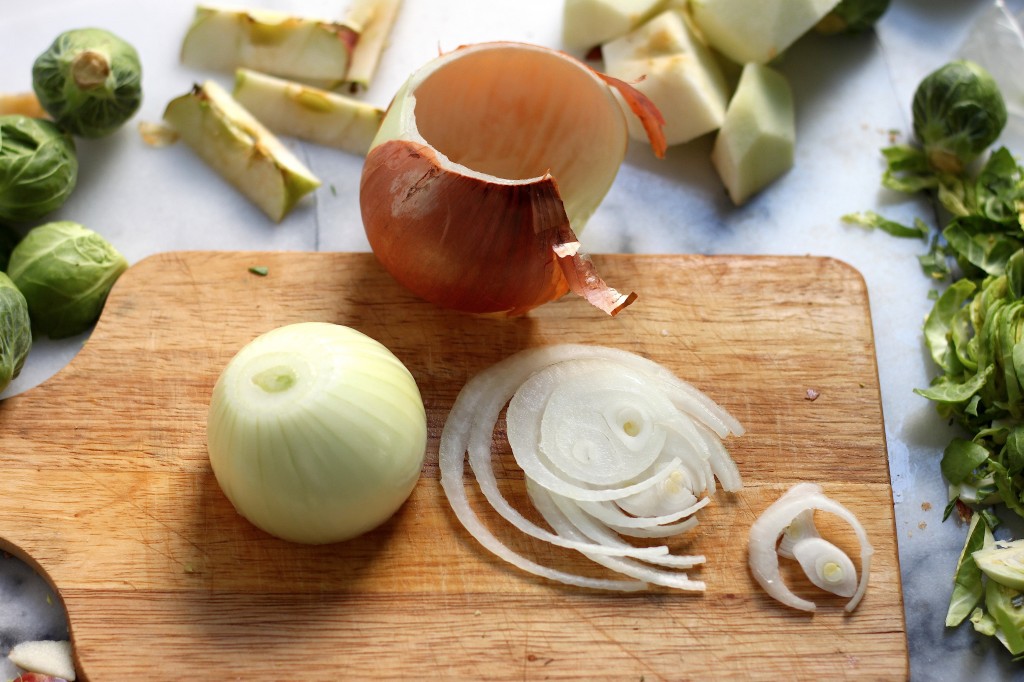 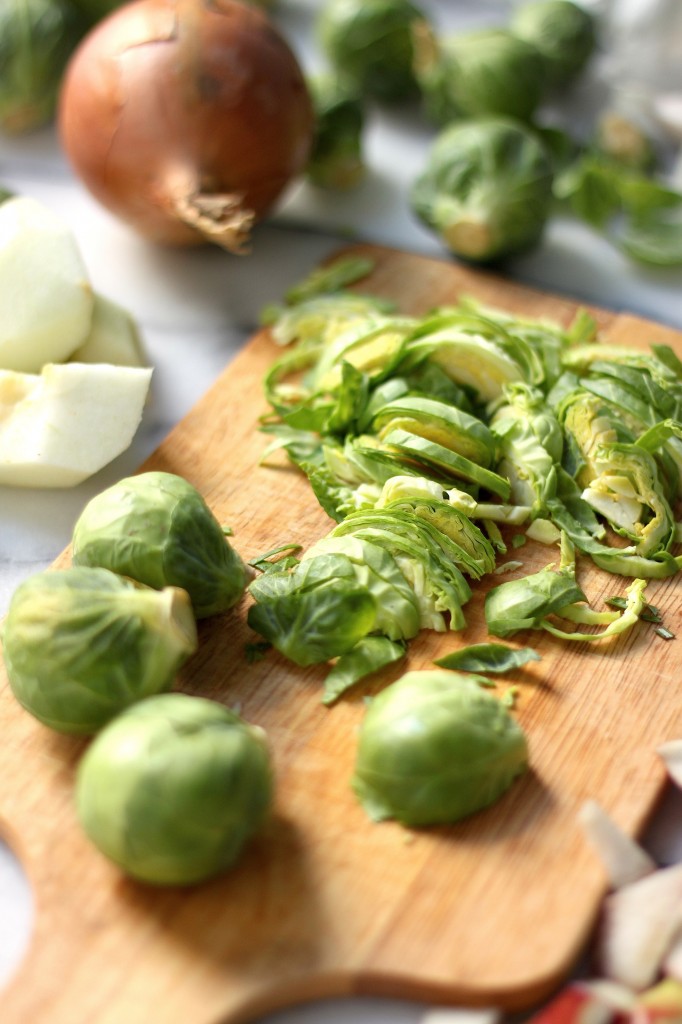 Ok. So maybe this was really my dinner… but I’m all for YOU recreating this sultry brown sugar rosemary pork chop and caramelized brussels sprout, onion, and apple situation in your very own kitchen. It’s a moderately quick and cheap meal that sticks to your bones with out really sticking to them… if you know what I mean 😉 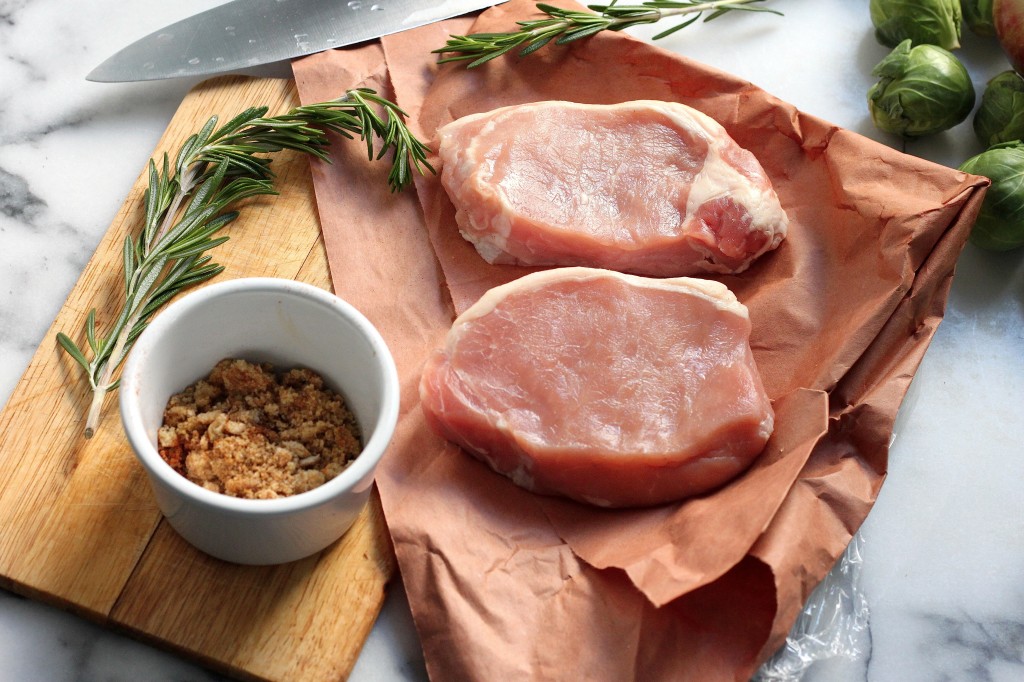 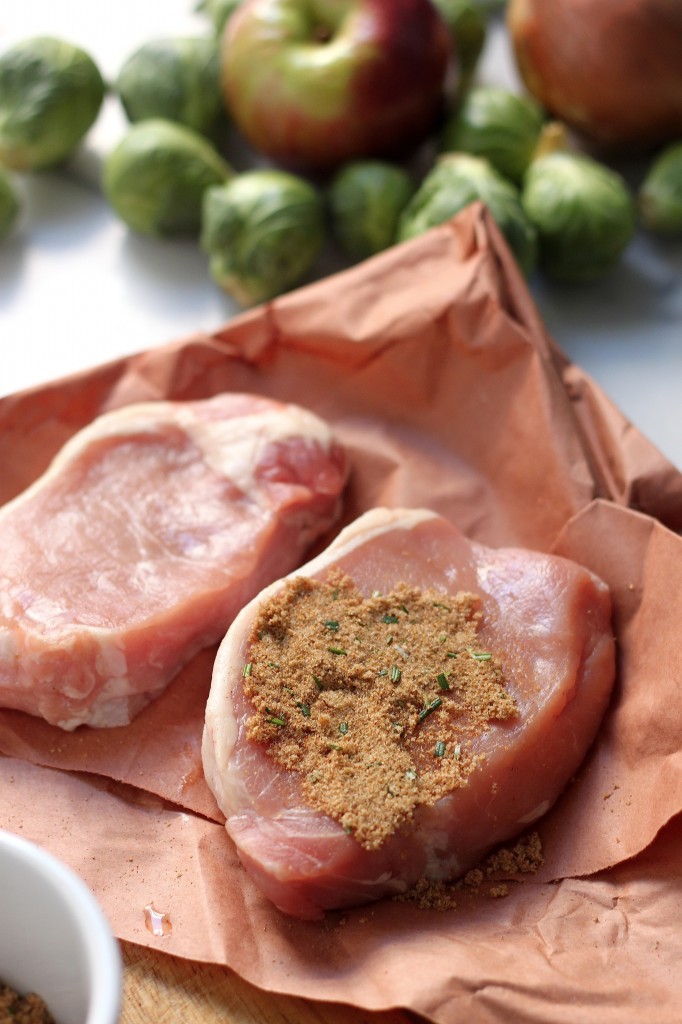 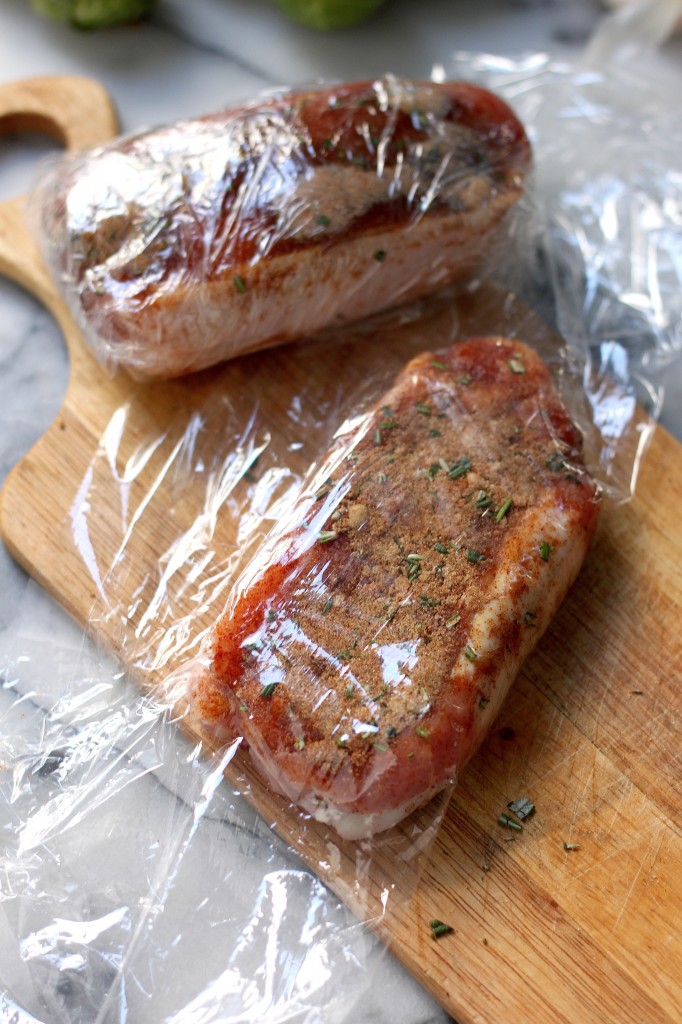 It’s also just a plain delicious dinner option! The pork chops (which are amazingly affordable even if you’re buying the all natural/organic variety) are marinated in a brown sugar/ rosemary rub that also has little pops of cumin, cayenne, and paprika. This marinating process is only a 20 minute affair, and can be done while you’re shredding your veggies to prepare the caramelized brussels sprout, onion, and apple slaw. WIN.

The slaw can be cooked in a skillet or just a large pot/pan. The important thing is that there’s room for all the veggies to lay in one even layer. This ensures they’ll all get in on the caramelizing action. VERY important stuff.

The brussels, onions, and apples are slowly cooked in some olive oil for about 15 minutes (this is where they melt into their true potential) before getting hit with a punch of brown sugar, apple cider vinegar, and a few spices. The slaw cooks a few more minutes on verrrrrrry low, and then, boom – it’s ready! I usually use those last few minutes to cook my pork chops, which, depending on thickness usually takes between 4 (for really thin ones) and 10 (for really thick ones) minutes. This guide is great if you’re new to cooking pork.

I hope this warm meal is on your menu soon! And happy humpday, friends. 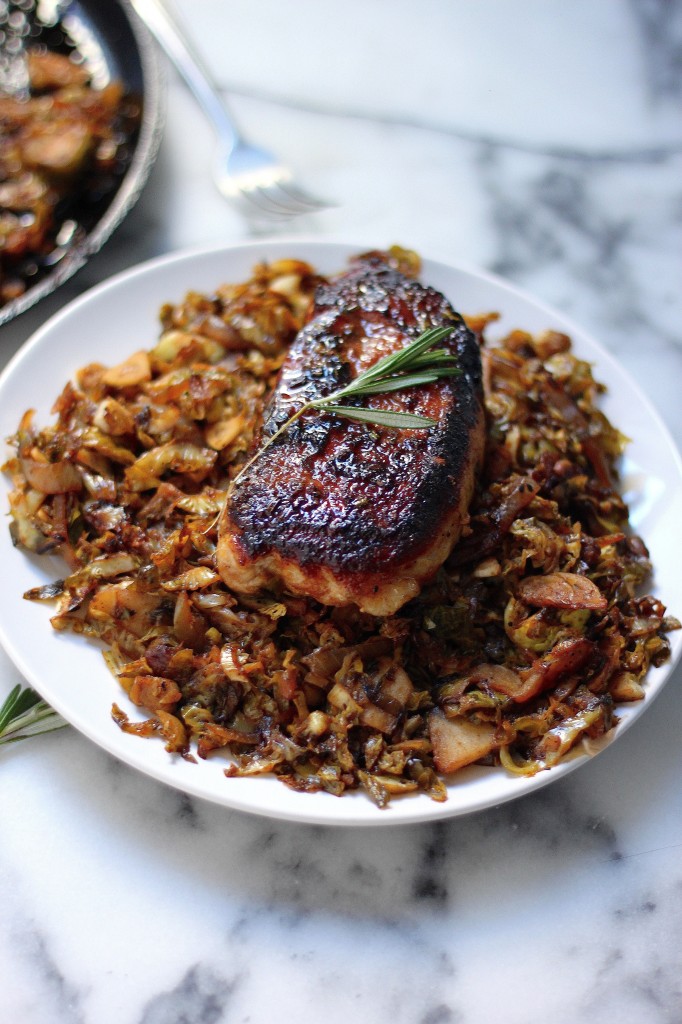 1 lb. boneless pork chops, I used 2, but you can buy thinner ones if you want to stretch the meal to serve 4 😉

For the Caramelized Brussels Sprout, Onion, and Apple Slaw:

1 large yellow onion, peeled, cut in half, then thinly sliced

1 lb. brussels sprouts, cut in half then thinly sliced

Place pork chops on a large, clean, cutting board; set aside.

In a small bowl mix together the rosemary, brown sugar, cumin, salt, cayenne, and paprika.

Spread about 1 tablespoon of the spice mixture on each side of the pork chops, and using your fingers massage it into each side. Wrap each pork chop tightly in a piece of cling wrap, and place in the refrigerator for at least 20 minute, and up to 24 hours.

When ready to cook, remove pork chops from refrigerator, unwrap, and let sit at room temperature for 5 minutes before cooking.

Heat 2 tablespoons of oil in a large skillet over medium flame. Add pork chops and cook for 2 – 6 minutes on each side (this really depends on the thickness of your meat) before flipping to cook for another 2 -6 minutes on the other side. Your pork chops should be nice and crispy on the outside, and nice and juicy (and NOT pink) on the inside. Let pork chops rest 3 minutes in the pan before serving.

Serve with the caramelized brussels sprout, onion, and apple slaw.

For the Caramelized Brussels Sprout, Onion, and Apple Slaw:

Add the brown sugar, apple cider vinegar, and spices; stir well to combine. Cook mixture on medium for another 5 minutes – or until the apple cider vinegar has completely evaporated and the vegetables look soft and deeply caramelized. Increase the heat to medium-high for 2 minutes, then remove pan from heat.

Taste to adjust seasoning as needed, and serve at once. 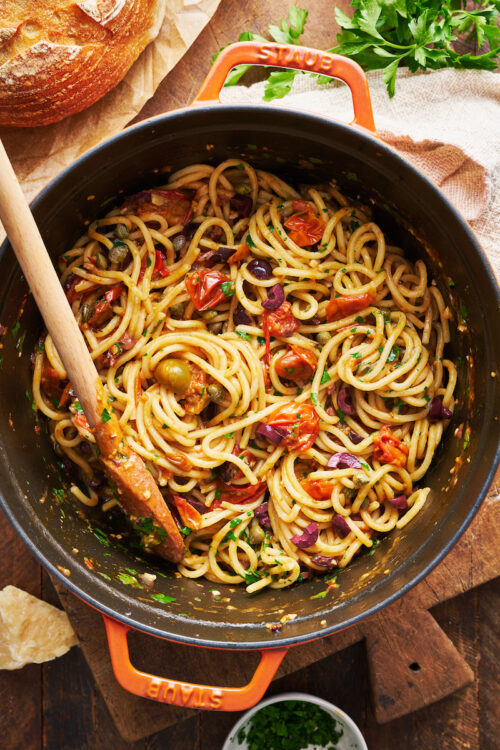 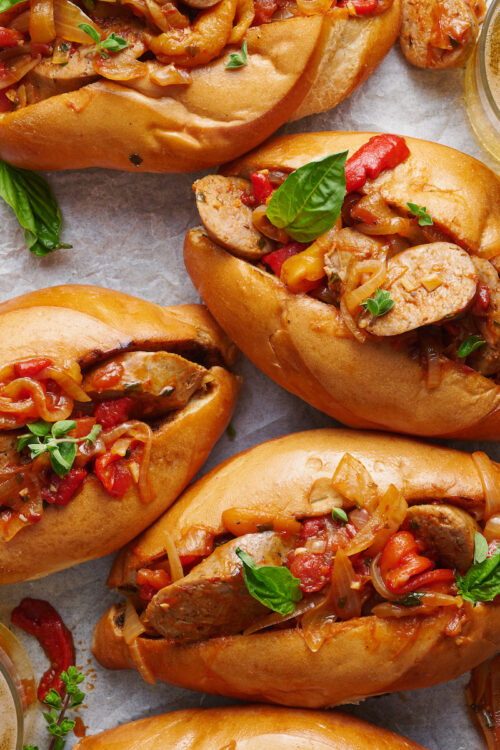 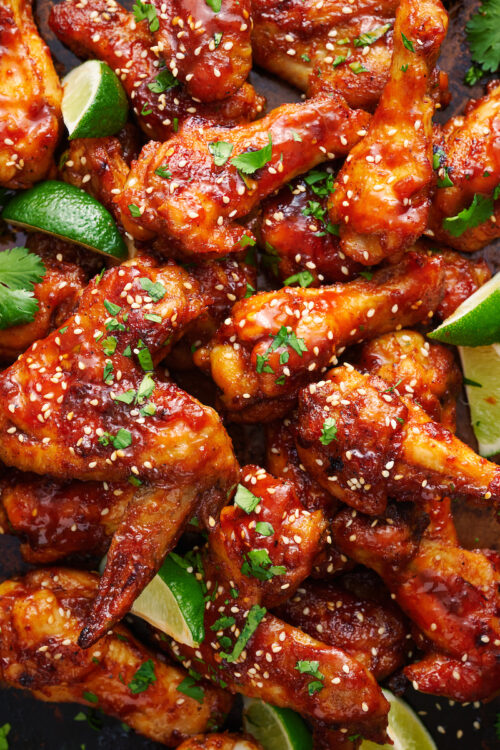 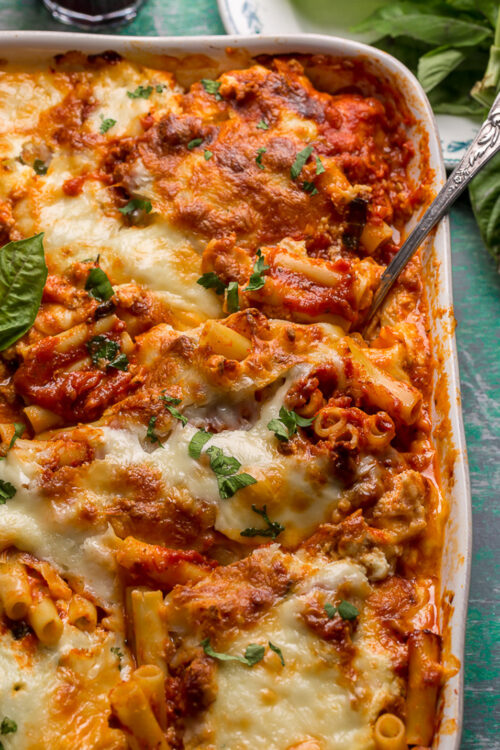 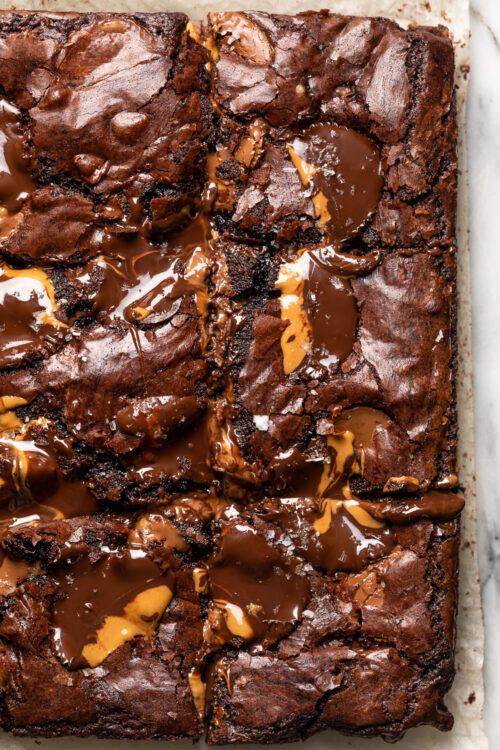