Fluffy Lemon Cupcakes are topped with BLACKBERRY Buttercream! These Lemon Blackberry Cupcakes are so pretty and always a showstopper. Their refreshing flavor makes them perfect for Spring and Summer celebrations! 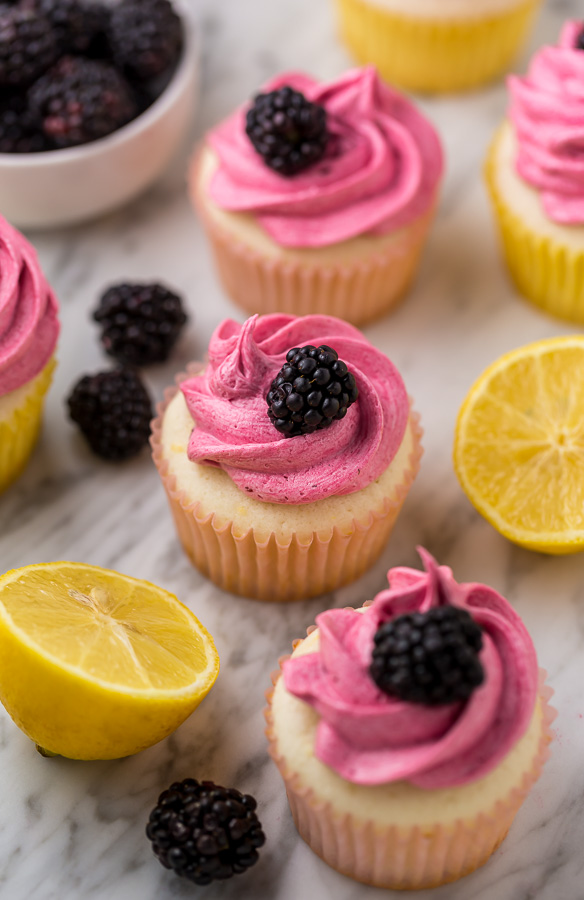 Fact: I’m a little cupcake obsessed this Summer. Cannot get enough of them! Doesn’t matter if they’re Super Decadent Chocolate Cupcakes or of the Perfect “One Bowl” Vanilla variety – I WANT THEM ALL.

Question Tiiiiime: What’s your favorite cupcake flavor? Are you into crazy flavor combos? Or more of a classic chocolate/strawberry/vanilla kinda guy (or gal)? 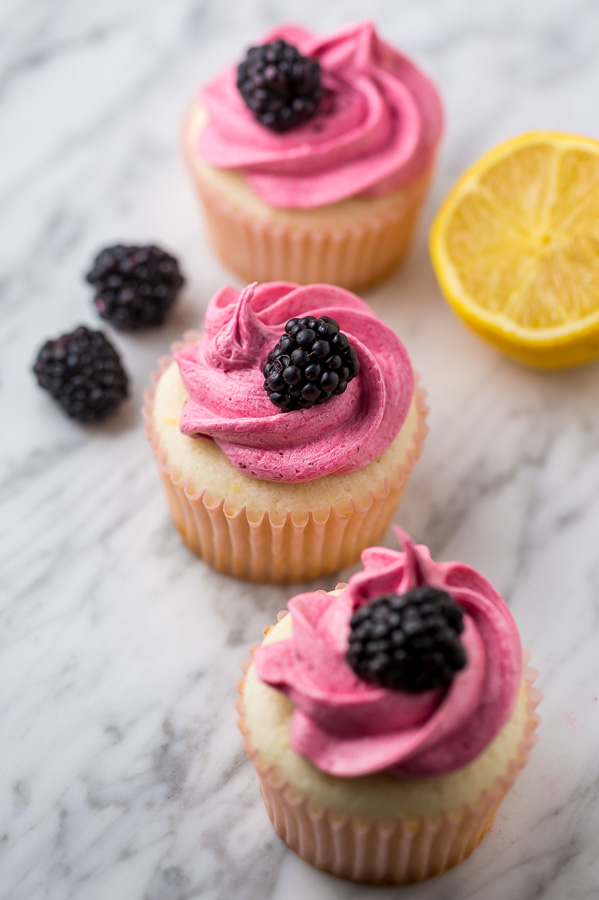 Homemade cupcakes can seem like a lot of work to some people, but I’m here to tell you these lemon blackberry beauties are totally doable in just over an hour, and virtually impossible to screw up. They’re also just downright FUN to make! Cupcake baking is one of my favorite ways to spend an afternoon or evening, and the workload is even easier (and a lot more FUN) if you have a friend joining in on the action. I baked 3 different cupcake recipes down the beach with my nieces, and it was a BLAST! I definitely think we have some budding bloggers in the fam 😉

This simple but lovely flavor combo was inspired by the late Summer wave of (very fresh and affordable) berries we have at our fingertips. Cheap and juicy berries… such a luxury! I ate 2 cartons standing over the sink, and decided halfway through the third to regain some self-control and make a vibrantly flavored (and colored) buttercream with what was left. Thank goodness that self-control kicked in! This buttercream is killer 😉 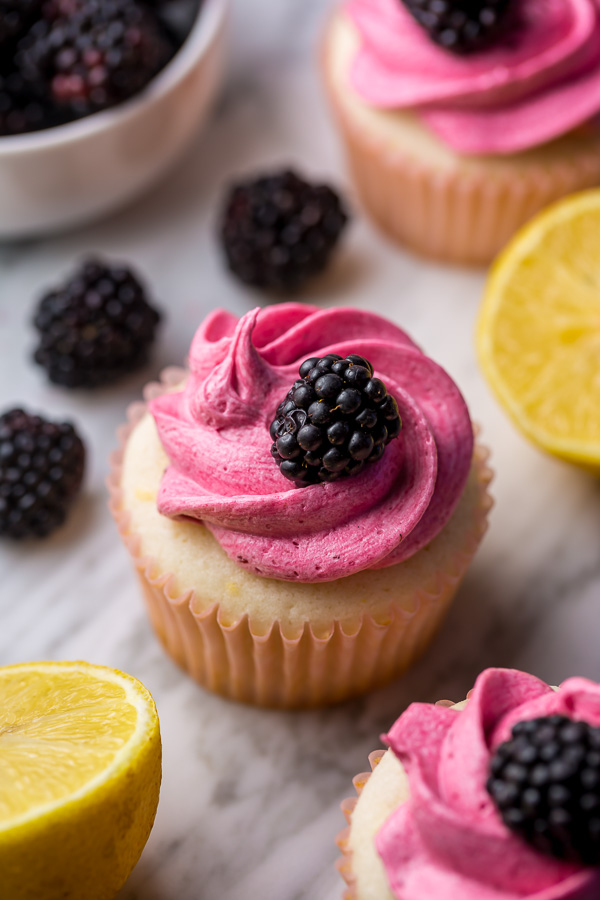 These cupcakes are a little more work than the store-bought kind… but they’re also SO much more rewarding in the end. The base of this recipe features an easy-to-make lemon cupcake. These cupcakes are made with lemon sugar, butter, flour, baking soda, sour cream, milk, vanilla and egg whites. The method is very simple, and you can make them with or without a stand mixer.

Two things to be sure you do do:

1) Separate your eggs and use only the whites! This keeps the cupcakes light in color and nice and fluffy. If you add the whole egg it will mess with the consistency of the cupcake, since the whole egg is much more liquid. 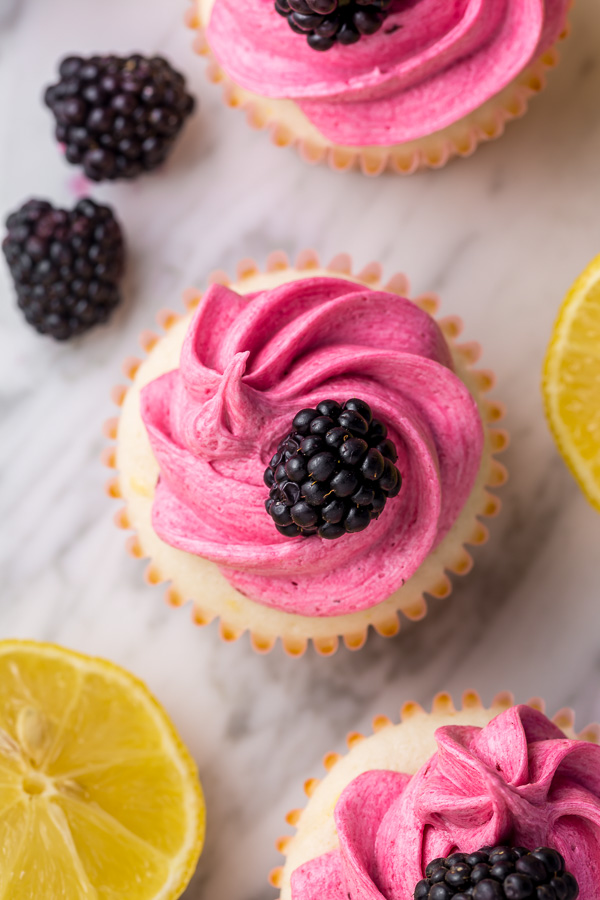 The blackberry buttercream is probably the trickiest part of this recipe, but I think once you read how it’s done, you’ll find it’s really not tricky at all 😉 The first time I tested this recipe I tried adding fresh blackberries straight into the buttercream. That did not work. The berries broke up, released liquid, and made the buttercream a very strange texture. Hmm. Onto batch two! For my second go, I tried using a store-bought blackberry jam. This one came out OK… but the jam was sweetened, and I found the blackberry taste was mute. I wanted a bold blackberry taste. So for the third try (the winning round!) I made a blackberry reduction from blackberries, lemon juice, and just a touch of sugar.

Now, if you’re like, EEK. A blackberry reduction sounds like a lot of work. Relax 🙂 It’s really easy. You’re just going to place the blackberries in a small saucepan, add the lemon juice, and cook it on a low simmer for about 20 minutes. During this time the berries will burst, release juice, and cook down to a nice, thick berry puree. Once it’s reduced to about a quarter cup, you’ll set it aside to cool, maybe do some dishes, and then add it to the buttercream. See! Easy, right?

So next time you need/want to get your cupcake on, ditch the store-bought stuff and make your own! Once you see how simple and fun making them from scratch is, you’ll never want to go back to the box. And that’s a promise 😉 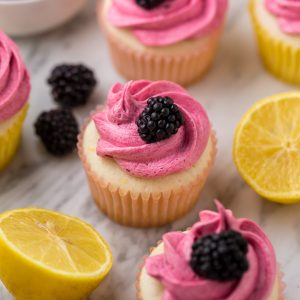 For the Blackberry Buttercream:

For the blackberry buttercream:

When ready to make buttercream:

*For a stronger lemon taste, add 1 or 2 teaspoons of lemon juice to the batter. To do this, quickly stir it in right at the end, mixing just until combined.
Tried it and loved it?Snap a picture and share it with me on Instagram @Bakerbynature and by using the hashtag #BakerByNature
Share84
Pin45K
Tweet
45K Shares 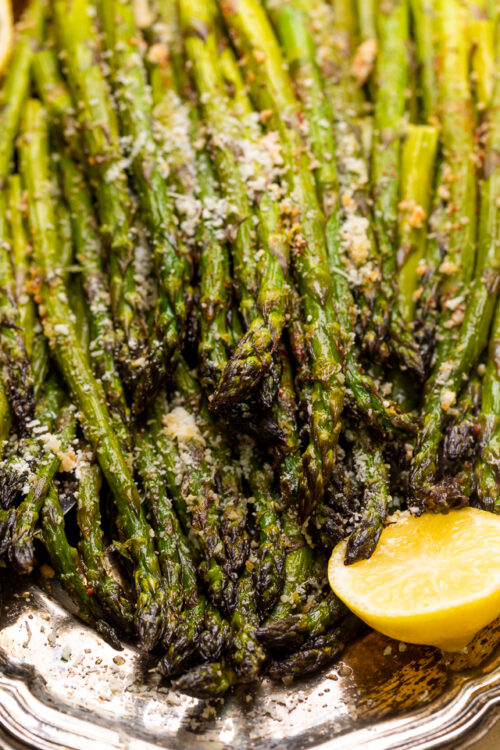 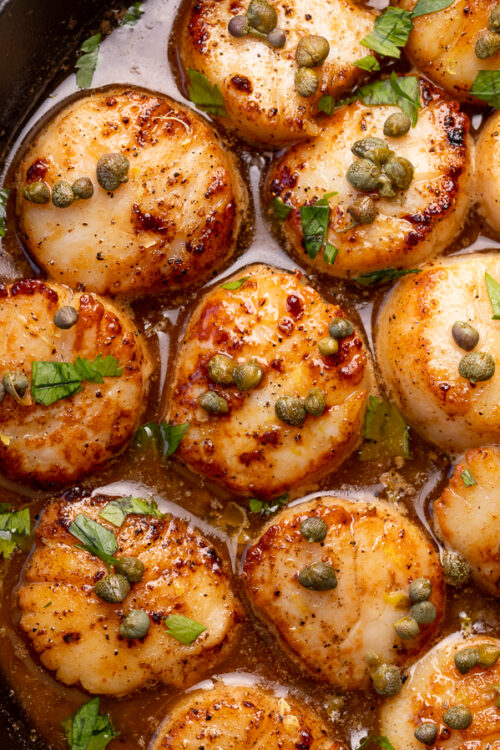 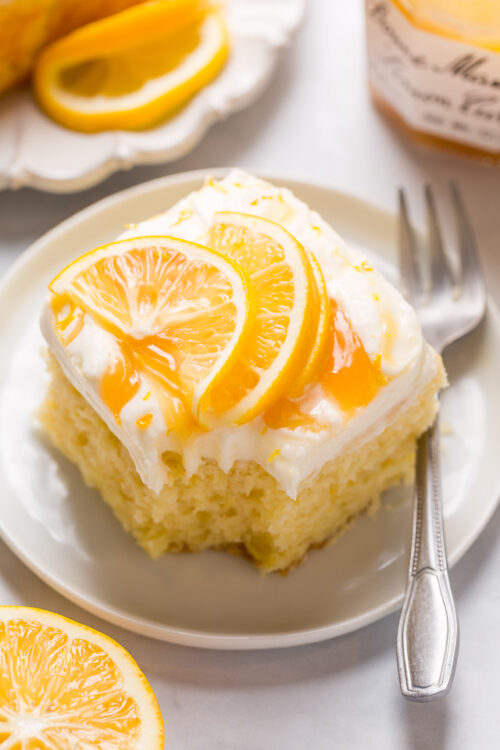 Lemon Cake for a Crowd 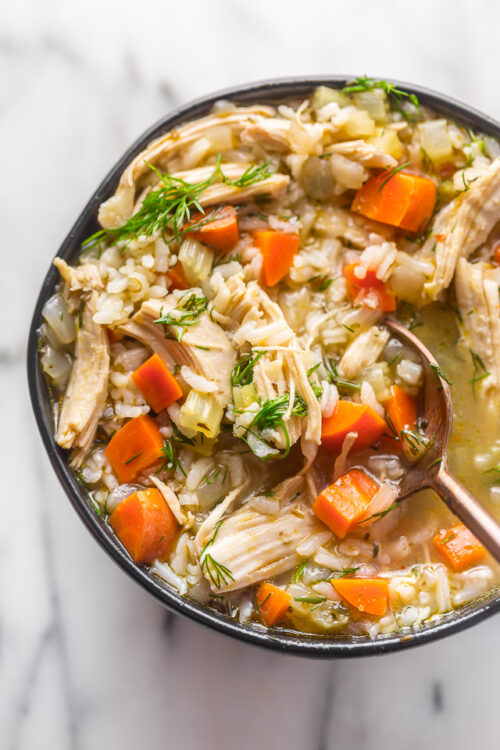 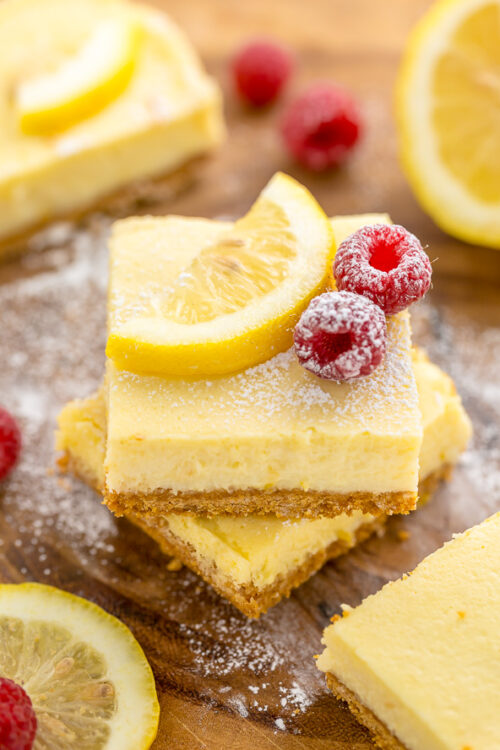