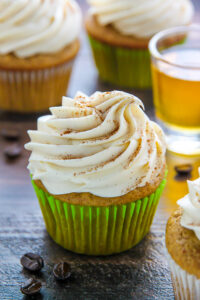 *Cupcakes may be frozen, unfrosted, for up to 2 months. *Cupcakes must cool completely before being frosted.

* Percent Daily Values are based on a 2,000 calorie diet. Your daily values may be higher or lower depending on your calorie needs.

Recipe by Baker by Nature at https://bakerbynature.com/irish-coffee-cupcakes/