Featuring buttery biscuits topped with sugar and cinnamon and gooey apple pie filling, these cinnamon apple shortcakes are a Fall favorite! A great way to use up an abundance of apples. Top with freshly whipped cream or ice cream! 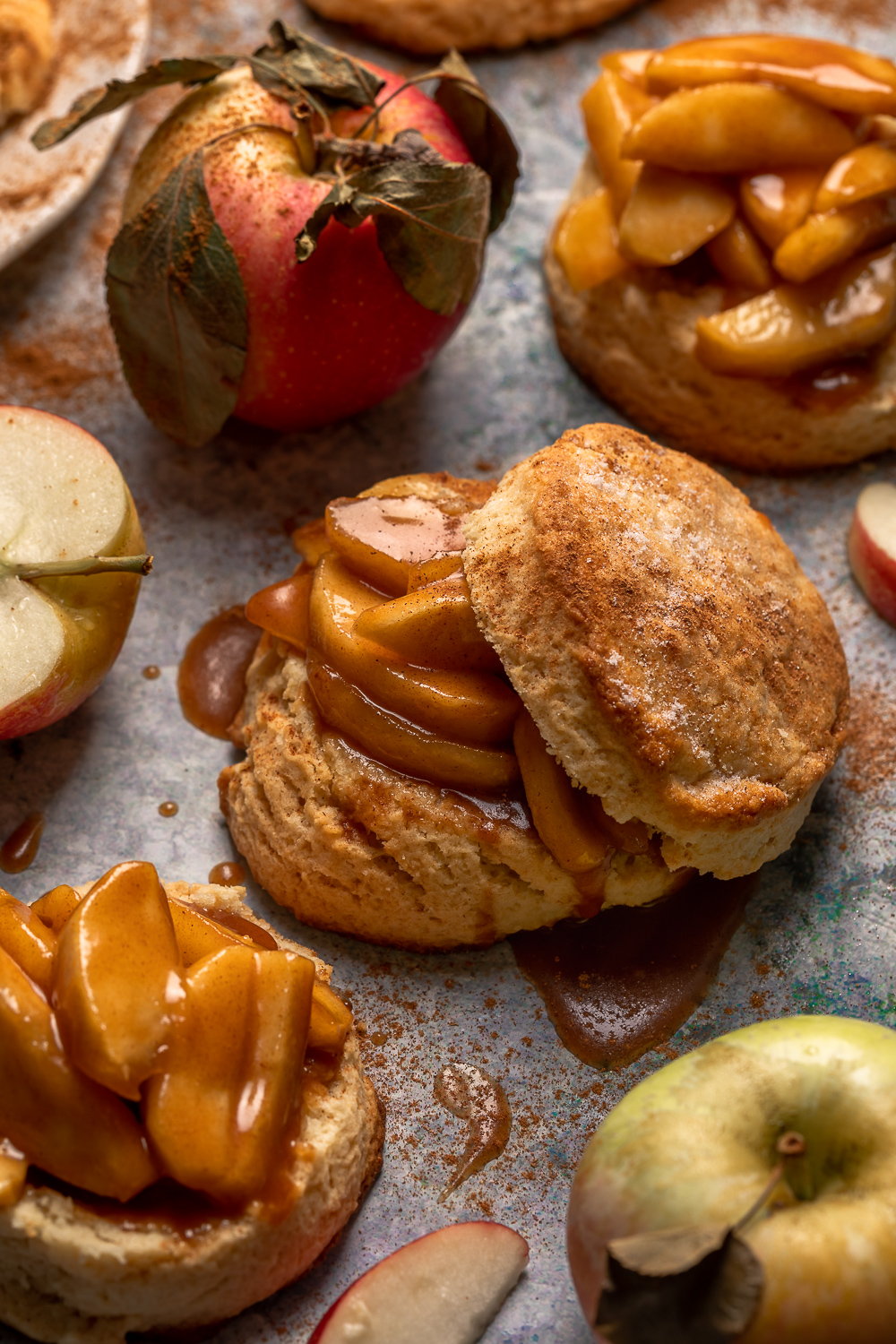 It’s our first apple recipe of the season! And I’m so excited to share these apple shortcakes with you! They’re obviously a spin on the classic Summer treat: strawberry shortcake! But I figured… why let strawberries have all the fun? Why not take this delicious shortcake idea and give it a cozy Fall spin? 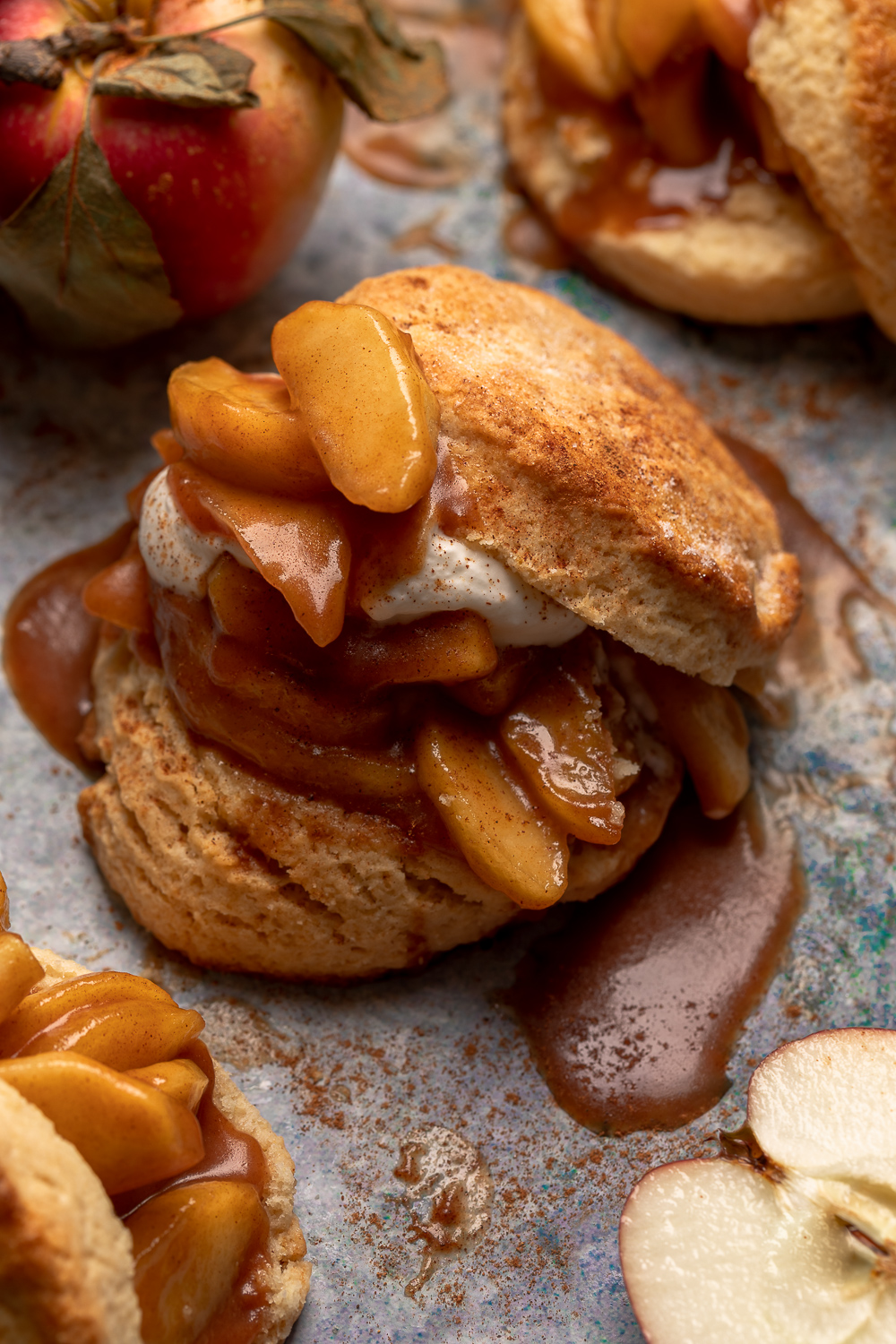 And that my friends, is exactly what I did! Enter these cinnamon apple shortcakes! The flaky biscuits are golden brown and flavored with warm spices and just enough sugar. And the apple filling is reminiscent of what you’d find inside a homemade apple pie! But the best part? This quick treat comes together in less than an hour… and will be consumed in minutes! 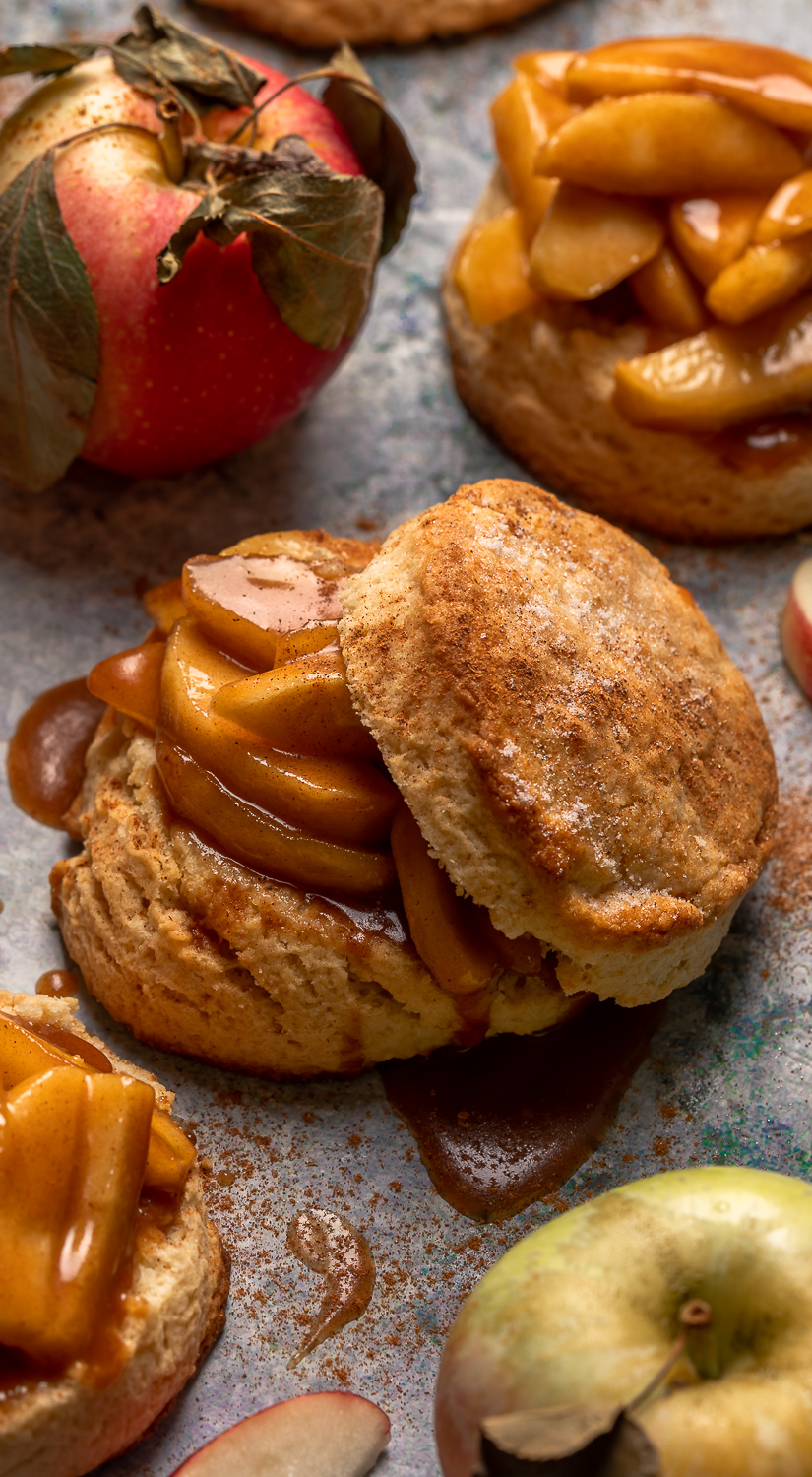 Aka the shortcake part of this recipe! These biscuits are tender, slightly sweet, and super flaky! Made with basic ingredients like flour, sugar, baking powder, butter, and heavy cream, they’re easy to whip up anytime a craving strikes! Just make sure your butter is cold, cold, COLD! Soft or even worse, melted butter, will create flat and dense biscuits.

And they come together very quickly! Just assemble the dough, you can do this by hand in a large bowl, or in the food processor. Then pat the out the dough on top of a counter. Use a biscuit cutter to carefully cut out 4 biscuits, then bake! All in all, this should take just a little over 30 minutes. If you’re not ready to bake right away, you can wrap the disc of dough in plastic wrap and pop it in the fridge for 25-30 minutes. But I don’t recommend much longer than that. 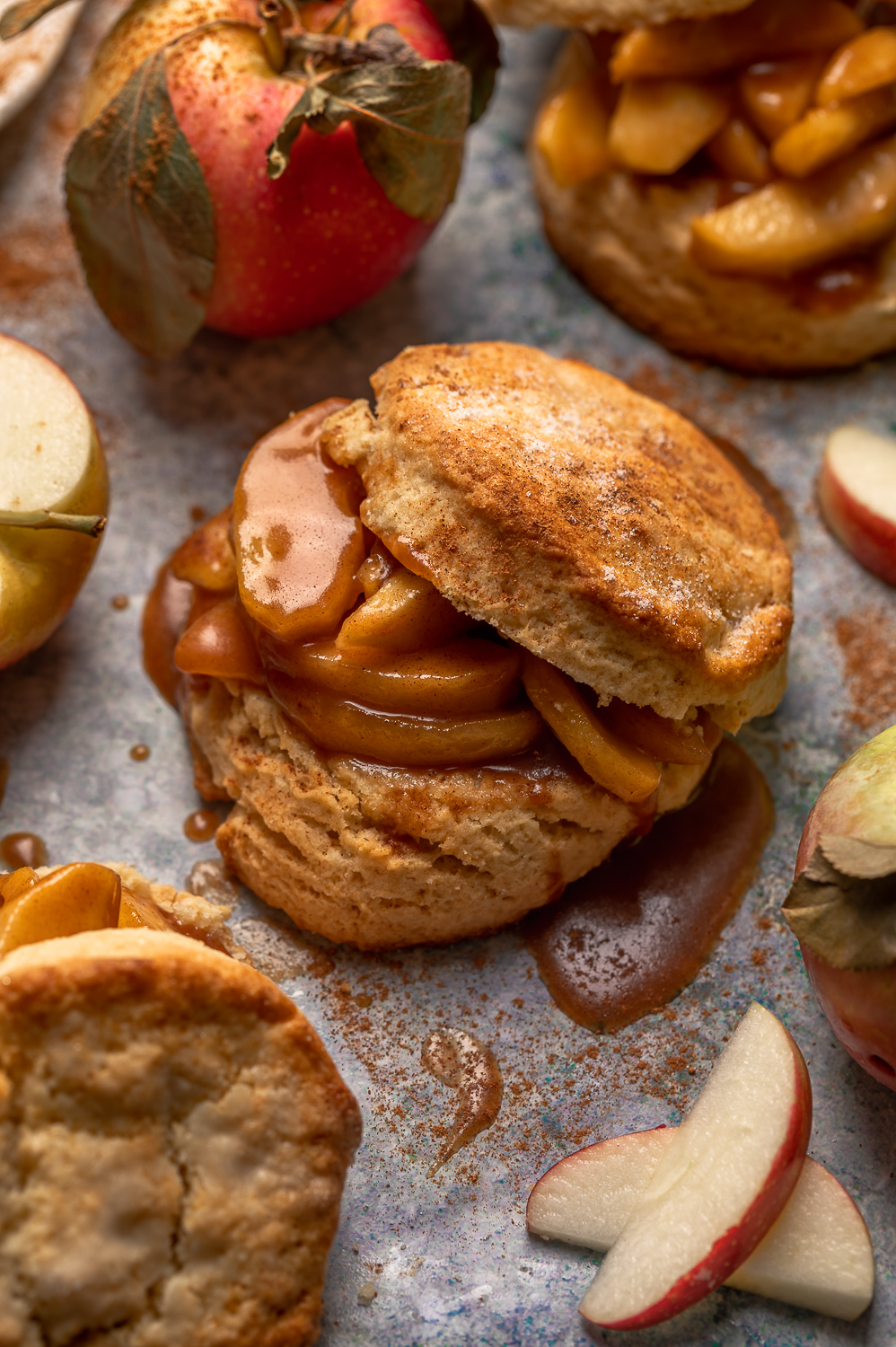 Moving onto the Apple Mixture!

Don’t be surprised if you find yourself making these apples just to eat by the spoonful… or with ice cream lol! These are similar to stewed apples, but instead of cooking them in just sugar and water, we cook them in a combination of lemon juice, butter, brown sugar, granulated sugar, and cinnamon! Plus, a touch of flour to thicken. So simple, but oh-so-delicious!

These apple shortcakes are divine with freshly whipped cream! But if you’re not a whipped cream fan (???), feel free to add ice cream, a drizzle of salted caramel sauce, or a light dusting of icing sugar!

While this might be our first apple recipe of the season, it’s certainly not our last! Keep your eyes peeled for apple fritters, apple crumb cake, and even an apple cheesecake! And if you can’t wait, check out all of the apple recipes I’ve linked below! 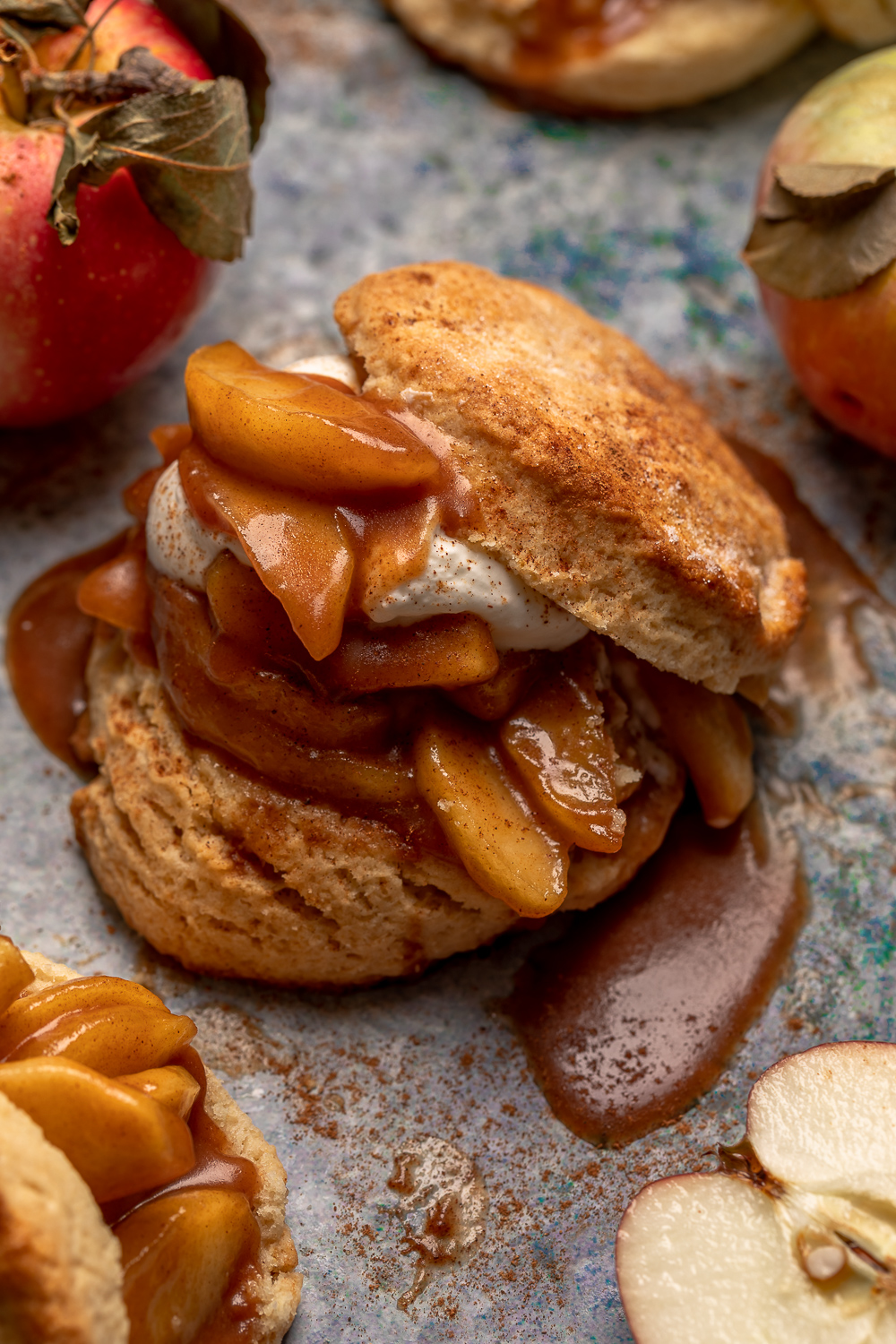 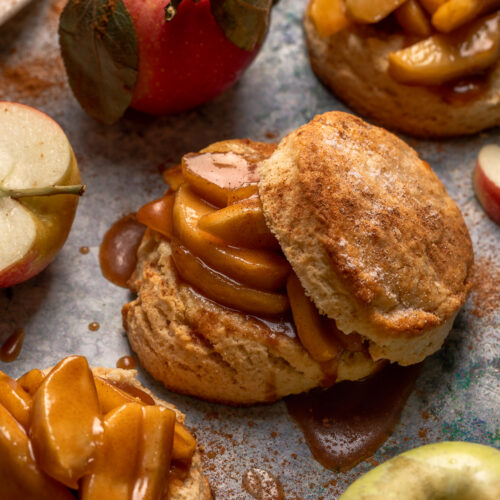 For the Cinnamon Sugar Biscuits:

For the Apple Topping:

For the Whipped Cream:

For the Cinnamon Sugar Biscuits:

For the Apple Topping:

For the Whipped Cream: 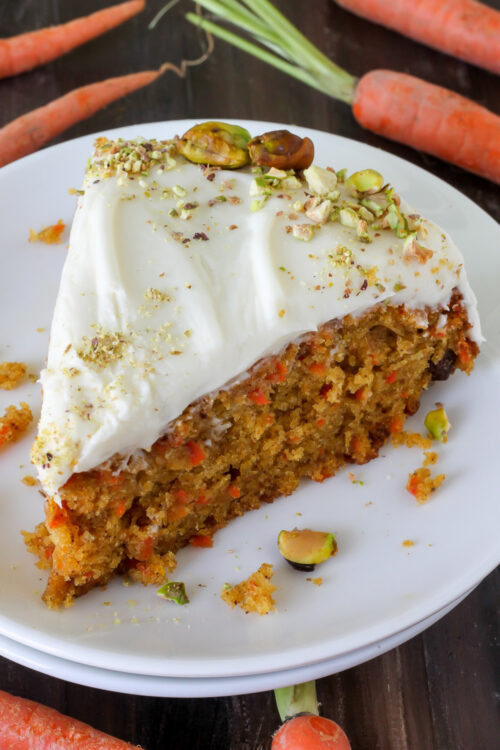 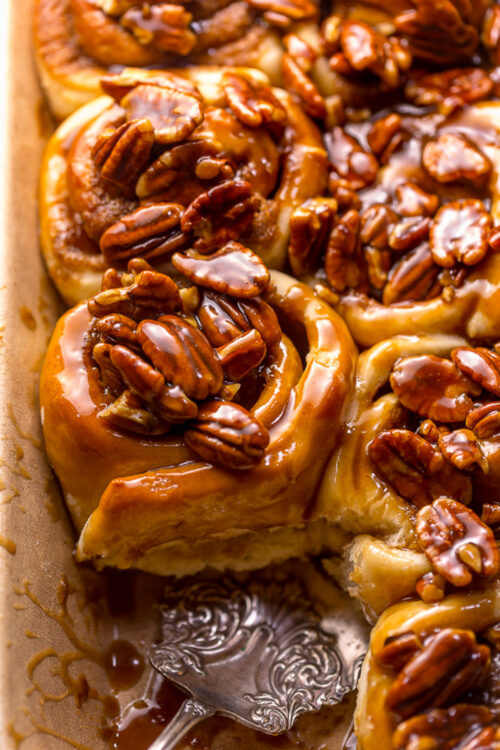 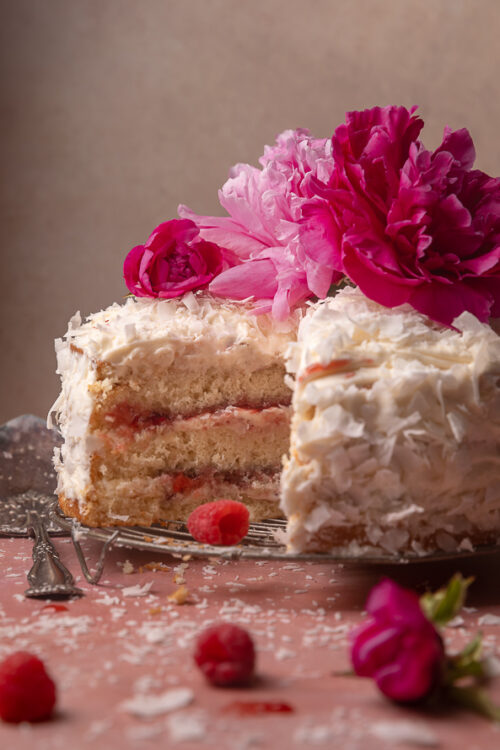